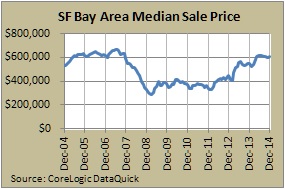 CoreLogic® (NYSE: CLGX), a leading global property information, analytics and data-enabled services provider, today released its December San Francisco Bay Area housing market report. Home buying picked up steam late in 2014, with December posting strong month-over-month and year-over-year sales gains. Price appreciation remained lower than it had been earlier in 2014, but the median sale price, which has moved little since late last summer, was still nearly 10 percent higher than it was the same time a year earlier. A total of 7,456 new and resale houses and condos sold in the nine-county Bay Area in December 2014. That was up month over month 24.2 percent from 6,003 in November 2014 and up year over year 14.1 percent from 6,532 in December 2013, according to CoreLogic DataQuick data. A rise in sales from November to December is normal for the season. Bay Area sales have risen an average of 9.6 percent between those two months since 1988, when CoreLogic DataQuick data began. The region’s monthly home sales have ranged between 7,000 and 8,000 for seven of the last nine months. Since 1988, December sales have varied from a low of 5,065 in 2007 to a high of 12,349 in 2003, and the December 2014 sales were 12.1 percent below the December average of 8,482. The median price paid for a home in the Bay Area was $603,000 in December 2014. That was up month over month by 0.3 percent from $601,000 in November 2014 and up year over year 9.9 percent from $548,500 in December 2013. December 2014 was the 33rd consecutive month with a year-over-year gain in the median sale price. However, those annual increases slipped from double-digit to single-digit in the last two months of 2014. In December 2013 the region’s $548,500 median was 23.9 percent higher than in December 2012. The Bay Area median sale price peaked at $665,000 in June and July 2007 and dropped to a post-boom low of $290,000 in March 2009. “The Bay Area’s residential real estate market ended 2014 on a cautiously optimistic note, with moderate year-over-year increases in both median price and sales counts,” said John Karevoll, CoreLogic DataQuick analyst. “Supply continues to be constrained, and the mortgage market remains difficult. As long-term trends, cash sales and investor purchases are declining slowly, but they are still significant market factors. We know that there is a significant amount of pent-up demand lying in wait, and there is a good chance the market could see a surge this spring and summer as more homes are put up for sale.” Other December 2014 Bay Area housing market highlights include the following: