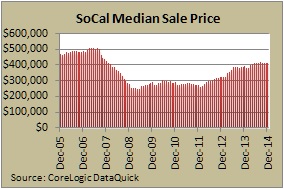 CoreLogic® (NYSE: CLGX), a leading global property information, analytics and data-enabled services provider, today released its December Southern California housing market report. The number of homes sold increased sharply from the month of November and rose modestly from the same time a year earlier, marking one of just two months in 2014 to post a year-over-year gain in sales. The region’s median sale price also increased from November and rose year over year for the 33rd consecutive month, although that annual gain was the lowest since the string of price increases began in spring 2012. A total of 19,205 new and resale houses and condos sold in Los Angeles, Riverside, San Diego, Ventura, San Bernardino and Orange counties in December 2014. That was up month over month 22.8 percent from 15,643 sales in November 2014, and up year over year 4.3 percent from 18,415 sales in December 2013, according to CoreLogic DataQuick data. Sales usually increase from November to December. On average, Southern California sales have risen 13.1 percent between those two months since 1988, when CoreLogic DataQuick data began. On a year-over-year basis, sales in 2014 fell each month except in September (+1.2 percent) and December. The total number of homes sold in Southern California in all of 2014 fell 8.7 percent compared with 2013. December home sales have ranged from a low of 13,240 in 2007 to a high of 36,865 in 2003. December 2014 sales were 20.2 percent below the December average of 24,067 sales since 1988. “One month doesn’t make a trend, but December’s uptick in home sales might indicate renewed interest in housing thanks to lower mortgage rates and job growth in recent months,” said Andrew LePage, data analyst for CoreLogic DataQuick. “The gain came despite a continued decline in the share of homes sold to investors and cash buyers. If demand continues to build we’ll need more supply to keep up with it. One of the big questions hanging over the housing market is whether higher demand and home values will lead to a lot more people listing their homes for sale, as well as more new-home construction, which remains well below average.” The median price paid for all new and resale houses and condos sold in the six-county region in December 2014 was $415,000, up 0.7 percent month over month from $412,000 in November and up 5.1 percent year over year from $395,000 in December 2013. The median hasn’t moved much since September 2014, when it was $413,000. The median’s peak for 2014 was $420,000 in August. The region’s median sale price has increased on a year-over-year basis for the past 33 consecutive months, but the 5.1 percent annual gain in December 2014 was the smallest since April 2012, when the $290,000 median rose 3.6 percent from a year earlier. Southern California’s December median sale price was 17.8 percent below the peak median price of $505,000 reached in March, April, May and July of 2007. Among the region’s six counties, the December 2014 median in Orange County ($591,000) was the closest – within about 8 percent – to its peak of $645,000 in June 2007. Home prices in Southern California have been rising at different rates depending on price segment. In December, the lowest-cost third of the region’s housing stock experienced a 12.9 percent year-over-year increase in the median price paid per square foot for resale single-family detached houses. The annual gain was 6.3 percent for the middle third of the market and 2.3 percent for the top, most-expensive third. The number of homes that sold for $500,000 or more in December 2014 rose 10.1 percent compared with December 2013. Sales below $500,000 rose 3.4 percent year over year, and sales below $200,000 dropped by 20.6 percent.

Among the other Southern California housing market highlights from December 2014: