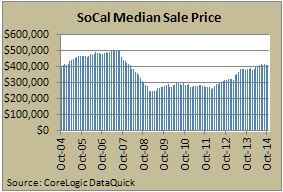 CoreLogic® (NYSE: CLGX), a leading global property information, analytics and data-enabled services provider, today released its October Southern California homes sales report. Southland homes sold at the slowest pace for the month of October in three years as sales to investors and cash buyers continued to run well below October 2013 levels. Additionally, the median price paid for a home fell month-over-month again and the single-digit gain from a year earlier was the smallest in 28 months.

Last month’s sales decline from September was not unusual. On average, Southern California sales have fallen 0.3 percent between September and October since 1988, when CoreLogic DataQuick data begin.

“It was another sub-par month for Southern California home sales. We’ve yet to see traditional buyers fill the void left by the drop-off in investor and cash buyers, which began in spring last year,” said Andrew LePage, data analyst for CoreLogic DataQuick. “Of course, there are multiple reasons for this year’s lackluster sales. New-home transactions are still running at about half their normal level. The resale market is hampered by constrained inventory in many areas, in part because some people who want to put their homes up for sale still haven’t regained enough equity to purchase their next home. Then there are the would-be buyers who continue to struggle with affordability and mortgage availability, if not uncertainty over their employment or the direction of the housing market.”

Home prices in Southern California have been rising at different rates depending on price segment. In October, the lowest-cost third of the region’s housing stock saw a 13.6 percent year-over-year increase in the median price paid per square foot for resale houses. The annual gain was 5.1 percent for the middle third of the market and 3.6 percent for the top, most-expensive third.

Short sales made up an estimated 5.9 percent of resales last month. That was down from 6.1 percent the prior month and down from 10.8 percent a year earlier. Short sales are transactions where the sale price fell short of what was owed on the property.