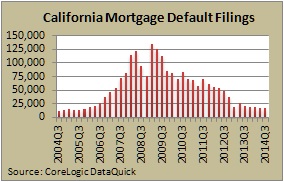 La Jolla, CA.–Lending institutions initiated formal foreclosure proceedings last quarter on the lowest number of California homes in more than eight years, the result of a recovering real estate market and the dwindling pool of toxic home loans made in 2006 and 2007, Irvine-based CoreLogic DataQuick reported.

A total of 16,833 Notices of Default (NoDs) were recorded at county recorders offices during the July-through-September period. That was down 3.9 percent from 17,524 for the prior quarter, and down 17.1 percent from 20,314 in third-quarter 2013, according to CoreLogic DataQuick data.

A Notice of Default is recorded at a county recorder’s office and marks the first step of the formal foreclosure process.

“This home repo pipeline isn’t exactly drying up, but it sure is diminishing. Its negative effect on the overall market is only a fraction of what it was several years ago, and is really only still noticeable in some pockets of the hardest-hit markets of the Inland Empire and Central Valley,” said John Karevoll, a CoreLogic DataQuick analyst.

Most of the loans going into default are still from the 2005-2007 period. Last quarter the median origination quarter for defaulted loans was third-quarter 2006. That has been the case for more than five years, indicating that weak underwriting standards peaked then.

On primary mortgages, California homeowners were a median 12.5 months behind on their payments when the lender filed the Notice of Default. Borrowers owed a median $28,684 on a median $316,651 mortgage.

On home equity loans and lines of credit in default, borrowers owed a median $6,706 on a median $67,500 credit line. The amount of the credit line that was actually in use cannot be determined from public records.

Although 16,833 default notices were filed last quarter, they involved 16,432 homes because some borrowers were in default on multiple loans (e.g. a primary mortgage and a line of credit).

Among the state’s larger counties, loans were least likely to go into default last quarter in Marin, Santa Clara and San Mateo counties. The probability was highest in Tulare, Madera and Fresno counties.

Lenders’ shift toward short sales as a foreclosure alternative has helped lower foreclosure activity in recent years. Short sales – transactions where the sale price fell short of what was owed on the property – made up an estimated 5.5 percent of the state’s resale market last quarter. That was down from an estimated 6.1 percent the prior quarter and 11.3 percent a year earlier.

Notices of Default houses and condos