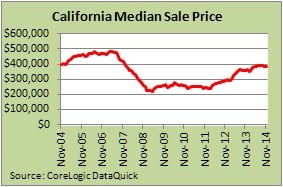 The November 2014 sales were the lowest for that month in seven years and the decline in activity from October was unusually sharp. However, the weak November sales tally is likely at least partially the result of a quirk of the calendar: There were only 17 days on which home sales could be recorded at county recorders’ offices this November, compared with 22 or 23 in October, depending on the county. Over the last decade, there has been an average of about 19 days for such recordings in the month of November.

November home sales have varied from a low of 25,578 sales in 2007 to a high of 60,326 sales in 2004. The November 2014 sales were 24.4 percent below the average of 38,990 sales for the month of November since 1988, when CoreLogic DataQuick data begin. California sales haven’t been above average for any particular month in more than eight years.

The median sale price has declined slightly month-over-month for the past three months. However, this November marked the 33rd consecutive month in which the state’s median sale price has been higher than a year earlier. Those year-over-year price increases peaked at 29.2 percent in July 2013 and since then have gradually ratcheted down, with single-digit annual gains since July of this year. The 5.8 percent year-over-year increase in the November 2014 median sale price was the lowest since March 2012, when the state’s $251,000 median increased 0.8 percent.

The November 2014 median was 21.3 percent lower than California’s peak $484,000 median reached in March/April/May 2007, and it was nearly 72.4 percent higher than the post-peak trough of $221,000 in April 2009. That trough was reached during a period when distressed property sales were at unusually high levels and sales of mid- to high-end homes were at relatively low levels.

Short sales made up an estimated 6.2 percent of the homes that resold in November, up from 6.0 percent in October and down from 10.2 percent in November 2013. Short sales are transactions in which the sale price fell short of what was owed on the property.

The typical California monthly mortgage payment that home buyers committed to in November was $1,446, down from $1,466 in October and up from $1,418 in November 2013. Adjusted for inflation, the November 2014 payment was 38.3 percent below the typical payment in spring 1989, which was the peak of the prior real estate cycle. It was 50.0 percent below the current cycle’s peak in June 2006 and 54.2 percent above the January 2012 bottom of the current cycle.