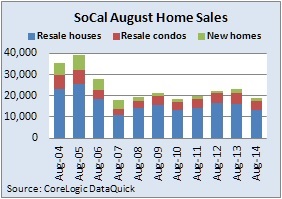 A total of 18,796 new and resale houses and condos sold in Los Angeles, Riverside, San Diego, Ventura, San Bernardino and Orange counties last month. That was down 7.7 percent from 20,369 sales in July, and down 18.5 percent from 23,057 sales in August 2013, according to CoreLogic DataQuick data.

On average, sales have risen 3.7 percent between July and August since 1988, when CoreLogic DataQuick statistics begin. Southland sales have fallen on a year-over-year basis for 11 consecutive months. Sales during the month of August have ranged from a low of 16,379 in 1992 to a high of 39,562 in 2003. Last month’s sales were 28.2 percent below the August average of 26,169 sales.

The median price paid for all new and resale houses and condos sold in the six-county region last month was $420,000, up 1.7 percent from $413,000 in July and up 9.1 percent from $385,000 in August 2013. Last month’s median was the highest for any month since December 2007, when it was $425,000. The median’s 9.1 percent year-over-year gain in August was the highest in three months. But it also marked the third consecutive month with a single-digit annual increase following 22 months of double-digit year-over-year gains as high as 28.3 percent.

“There was certainly pressure on home values this summer but some of that jump in the August median sale price appears to reflect a shift in market mix. A slightly higher share of sales occurred in the more expensive coastal markets, and that can nudge up the median. Nevertheless, prices are high enough to be a hurdle for a lot of potential buyers, even though mortgage rates have fallen in recent months. And price isn’t the only impediment. Some still struggle to qualify for a loan or to mend their household finances in the wake of the Great Recession. Others are simply waiting for price appreciation to give them enough equity in their homes to make a move up,” said Andrew LePage, an analyst with Irvine-based CoreLogic DataQuick.

Home prices have been rising at different rates depending on price segment. In August, the lowest-cost third of the region’s housing stock saw a 13.1 percent year-over-year increase in the median price paid per square foot for resale houses. The annual gain was 7.9 percent for the middle third of the market and 4.3 percent for the top, most-expensive third.

The number of homes that sold for $500,000 or more last month fell 0.6 percent compared with a year earlier. But sales below $500,000 fell 16.3 percent year-over-year. Sales below $200,000 dropped 35.6 percent. Sales in the lower price ranges are hampered by, among other things, the drop in affordability over the last year, a fussy mortgage market and a relatively low inventory of homes for sale.

Distressed property sales continued to fade as a market force.

Short sales – transactions where the sale price fell short of what was owed on the property – made up an estimated 5.9 percent of Southland resales last month. That was up slightly from 5.8 percent the prior month and down from 11.5 percent a year earlier.

Absentee buyers – mostly investors and some second-home purchasers – bought 23.5 percent of the Southland homes sold last month. That tied the July level as the lowest absentee share since December 2010, when 23.4 percent of homes sold to absentee buyers. Last month’s figure was down from 26.7 percent a year earlier. The peak was 32.4 percent in January 2013, while the monthly average since 2000, when the CoreLogic DataQuick absentee data begin, is about 19 percent.

Cash purchases hovered near a 5.5-year low last month. Buyers paying cash accounted for 24.4 percent of August home sales, up a hair from a revised 24.1 percent in July and down from 28.4 percent in August last year. The July 2014 figure was the lowest since January 2009, when 22.0 percent of Southland homes were bought with cash. The peak was 36.9 percent in February 2013, and since 1988 the monthly average is 16.6 percent.

In August, Southern California home buyers committed a total of $4.57 billion of their own money in the form of down payments or cash purchases. That was up from a revised $4.49 billion in July. The out-of-pocket total peaked in May 2013 at $5.41 billion.

Although credit conditions remain fairly tight, the use of larger “jumbo” home loans and adjustable-rate mortgages has generally trended higher this year compared with last, edging toward more normal levels.

Jumbo loans, mortgages above the old conforming limit of $417,000, accounted for 32.3 percent of last month’s Southland purchase lending, which is unchanged from July and the highest level since the credit crunch struck in August 2007. Last month’s figure was up from 27.0 percent a year earlier. Prior to August 2007 jumbos accounted for around 40 percent of the home loan market. The jumbo level dropped to as low as 9.3 percent in January 2009.

The typical monthly mortgage payment Southland buyers committed themselves to paying last month was $1,624, up from a revised $1,602 the month before and up from $1,553 a year earlier. Adjusted for inflation, last month’s typical payment was 33.6 percent below the typical payment in the spring of 1989, the peak of the prior real estate cycle. It was 45.6 percent below the current cycle’s peak in July 2007.