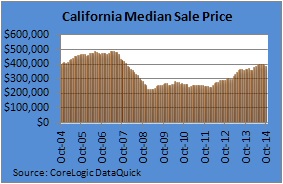 Statewide sales have increased slightly on a year-over-year basis for two consecutive months. The October sales tally was the highest for that month in two years. October sales have varied from a low of 25,832 in 2007 to a high of 70,152 in 2003. The October 2014 sales were 14.1 percent below the average of 42,860 sales for the month of October since 1988, when CoreLogic DataQuick data begin. California sales haven’t been above average for any particular month in more than eight years.

The median price paid for a home in California in October was $382,000, down 1.8 percent from $389,000 in September and up 7.0 percent from $357,000 in October 2013. The median sale price has declined slightly month-over-month over the past two months. However, October marked the 32nd consecutive month in which the state’s median price has been higher than a year earlier. Those year-over-year price increases peaked at 29.2 percent in July last year and since then they have gradually ratcheted down, with single-digit annual gains since July this year.

The October 2014 median was 21.1 percent lower than California’s peak $484,000 median reached in March/April/May 2007, and it was nearly 73 percent higher than the post-peak trough of $221,000 in April 2009. (That trough was reached during a period when distressed property sales were at unusually high levels and sales of mid- to high-end homes were at relatively low levels.)

Of the existing homes sold statewide in October, 5.3 percent were properties that had been foreclosed on during the past year. That was down from a revised 5.4 percent in September and down from 6.7 percent in October 2013. Foreclosure resales peaked at 58.8 percent in February 2009.

Short sales – transactions where the sale price fell short of what was owed on the property – made up an estimated 6.1 percent of the homes that resold in October. That was up insignificantly from 6.0 percent in September and down from 10.3 percent in October 2013.

Indicators of market distress continue to decline. Foreclosure activity remains well below year-ago and peak levels reached in the last five years. Financing with multiple mortgages is low, while down payment sizes are stable.